Browse: Home   /   Learning to read is the same skill in every language that uses an alphabet 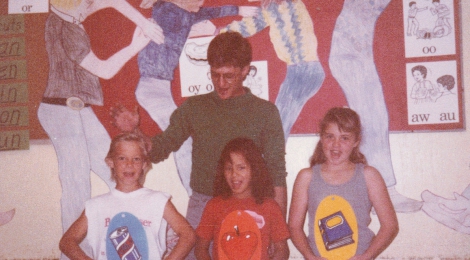 Learning to read is the same skill in every language that uses an alphabet. Children can learn to read in English and in Spanish at the same time. This happened when I taught the illiterate adults to read in 2 weeks for the Oprah Winfrey Show. Two of the adults spoke English and Spanish but they could not read either language. On the third day Paulina Gomez said, "I always knew that there was a secret code that no one would show me and that's why I couldn't read”. She was right if you don't know that there is a code, then it is a secret. The secret code is that the names of letters do not make words. The letters represent the sounds of the language. You need to know the sounds and put them together to make words. See a bee. is what a child hears when they look at the letters C-A-B. they hear see a bee. If they say the sounds that the letters represent C=cuh A=aah B=buh cuh-aah-buh the word cab will come right out of their mouth.

Action Reading teaches the secret code of English starting with the simplest sounds and teaching all of the code. The code is 26-44-70. A-R also has 100% decodable text - sentences, stories and plays that only use the sounds the child has learned up to that point. They will never have a word with an r-controlled sound until they have learned that sound.  We do not teach sight words. You cannot memorize 156,000 words by sight. It is ridiculous when all you have to do is learn the code and you can read all 156,000 words. A person who speaks and understands Spanish can also learn to read in a short time by learning the code of the Spanish alphabet. As soon as Paulina and Alberto (who both spoke Spanish) learned the few sounds that were different in Spanish, they were able to read in Spanish and in English.

The same thing happened when I taught 4th-8th grade students to read, write and speak English in 6 weeks in Gila Bend, AZ. Once they learned the code they could read Spanish and once they learned enough English vocabulary they could also read in English.