Browse: Home   /   History of the Alphabet 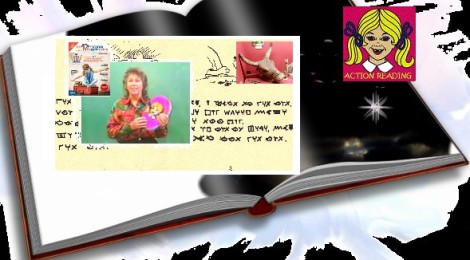 History of the Alphabet

People have always communicated.   Legends, information and knowledge were handed down from generation to generation by word of mouth.  Eventually people started leaving marks on rocks as a form of communication.  Our written language evolved from these early rock markings and cave drawings.  Many of these original drawings have been preserved in caves throughout the world. Linguists have established that our written language came from drawings in the Sinai Desert.  These drawings are called Sinai Hieroglyphics.

These first drawings were called pictographs because the picture represented exactly what it looked like.

This looked like the head of a bull and it meant a bull.

This is a picture of an eye.

This is a picture representing water.

When they put the water across the eye that would represent crying or weeping.

Weeping is a more abstract thought than just a picture of an eye.  It represents an idea.  Thus, these symbols are called idea graphs or ideographs.  Ideographs were the next stage of written communication.

The Phoenicians were traders and businessmen who needed a more concise form of communicating.  They did not have the time to carve huge slabs of stone with pictures on them.  Also, these picture stories were often misinterpreted – they needed a concise record keeping system.

it would represent a sound in their language which is buh.  Each symbol came to represent one sound in the Phoenician Language.  It was a perfect sound-symbol correspondence - one symbol for one sound.  The new writing method was the alphabetic system.  The alphabet has been claimed to be the greatest invention of humankind because it enabled humans to transmit information across miles and from one generation to another across centuries.

Every one of our letters comes from a pictographic symbol.
This drawing, which can be found in caves with prehistoric pictographs, represents the head of a bull.

If a person was being chased by a bull, and wanted to alert the other cavemen in the vicinity, they would not make such an elaborate drawing. Instead, they would use simple lines to illustrate the horns, ears, and nose.

Over many centuries, this symbol was turned on its side.

The Romans adopted it in this form.

They dropped off the extended arms and it became our capital letter A. The Hebrew name for this letter was Aleph. The Greeks called it Alpha.

This pictograph represented a house.

Eventually, it was turned on its side.

The rooms were closed up and divided.

The pictograph became rounded and is now our capital letter B. The Hebrews called this letter Beth, the Greeks called it Beta.

The Greeks called the first two letters 'Alpha' and 'Beta'.  We have joined those two letters names together to make our word, alphabet.  The Phoenicians developed the alphabet 5,000 years ago.  It was a perfect sound-symbol system.  One letter represented one sound.  The Phoenicians used symbols that had represented pictures or concepts but they changed these pictures from meaning bearing symbols to sound bearing symbols.  The symbols (letters) would be written down, (encoded) to send a message.  The reader would look at the symbols (letters) say the sounds that were represented by those symbols and decode (read) the message.  That is how writing and reading were invented.

The Action Reading FUNdamentals program includes a card that gives the history of each letter of the alphabet.   www.actionreading.com

The Romans conquered the entire known world and carried the alphabet with them on their conquests to the British Isles.  The people in the British Isles had no written language.  They were forced to use the Roman alphabet to write the English language but they ran out of letters.  There were only 26 letters and they had 44 sounds.  Eventually they had sounds that had no letters to represent them.  They had to combine letters together to represent a sound.  For example, when ‘S’ and ‘H’ are together they do not make the sounds 'suh' and 'huh'.  They say, ‘sh'.  That is why in English, we have 70 ways to write down the 44 sounds of our language.

The letters took their particular forms because of the instruments that were used to produce them.  When the Romans got the alphabet they were chiseling the letters in stone. The letters took on the shapes that were easily made with that tool. They came to be known as our capital letters or the Roman letters.

The printing press had not been invented yet so all books were hand written. As Monks sat and hand copied with ink and quills they tried to make faster forms of the letters.  They tried to make a two stroke A instead of a three stroke A.  Over many centuries is got rounded and became our lower case lower case a.

Every one of our lower case letters evolved from an upper case (capital) letter.

When the printing press was invented, each letter was set by hand into the press.  The capitals were kept on a top shelf and the printer would say to his assistant.  Hand me an A from the upper case.  Hand me two c’s from the lower case where he kept the Irish uncials. That is the only historical significance to our terms “upper” and “lower” case letters.

There was a time in the history of writing when people could write from right to left or left to right or back and forth in alternating directions.

The term Boustro Phedon is Latin meaning “as the ox plows.”  While it seems strange to us to write in one direction and then switch to another, it made perfect sense to primitive people who were used to plowing across a field then turning and plowing back the other direction.  Children who are beginning to learn to write can do this same thing.  They do not have a learning disability.  They just have to be trained to track left to right because in English we write from left to right.  Some languages, such as Hebrew, are written from right to left. The printing press standardized the direction of printing English from left to right.

What else is missing in this passage?

There are no spaces between the words and there is no punctuation. Beginning writers will also do this unless they are instructed to leave spaces between words, to write with lower case letters, and to begin sentences with a capital and end with the appropriate punctuation.

In 1450, Johann Gutenberg devised a way to cast movable type for printing.  In 1456, he printed the first book printed from movable metal type cast in molds.  It is generally referred to as the Gutenberg Bible.

The Action Reading FUNdamentals program teaches children to be fluent, independent, proficient readers who are able to read anything in English by teaching the alphabetic code using songs, games, activities and decodable text. www.actionreading.com

Jeanie Eller, M.A., is a nationally renowned Educator and Literacy Consultant.  She has taught kindergarten through graduate level classes for over forty years.  The National Right to Read Foundation recognizes her as one of the country’s leading Literacy experts.  She has been a featured guest on over 1500 radio and television talk shows coast to coast and a featured speaker for Home School meetings and conferences. She has held 14 summer camps to teach kids to read in two weeks and taught illiterate adults to read in two weeks for the Oprah Winfrey Show. She is the teacher on the FUNdamentals tutorial program available at www.actionreading.com