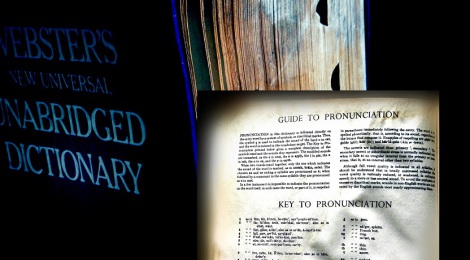 Using a Dictionary to Teach Reading

Every dictionary has the code of the English alphabet in the front of the book. It is the pronunciation key. It tells the sound for each letter or group of letters. Most dictionaries also give the history of the English language and the derivation of each letter of the alphabet. Sometimes the history of the letter is given as the introduction to that particular letter’s section of words.

The thing that is missing is the decodable text to practice the sounds.

It is still possible to teach a student to read using just the dictionary if the teacher knows the logical order in which to present the sounds of English.

Research supported by the NICHD shows that learning to read is a developmental process children go through in acquiring proficiency.  Because proficient readers employ processes that are different from beginning readers, research on good readers may not fully apply to beginning readers.  Skilled readers do not gloss or skip over words when reading text; they sample nearly every word.  Phonological codes that involve the sounds of words and help the reader decipher the words are activated early in word recognition in beginning and skilled readers.

When the dictionary was invented 400 years ago, words were pronounced the way they sounded.  Over many centuries the pronunciation changed but the spelling stayed the same.  That is why we have words such as “light” that is pronounced “lite.”